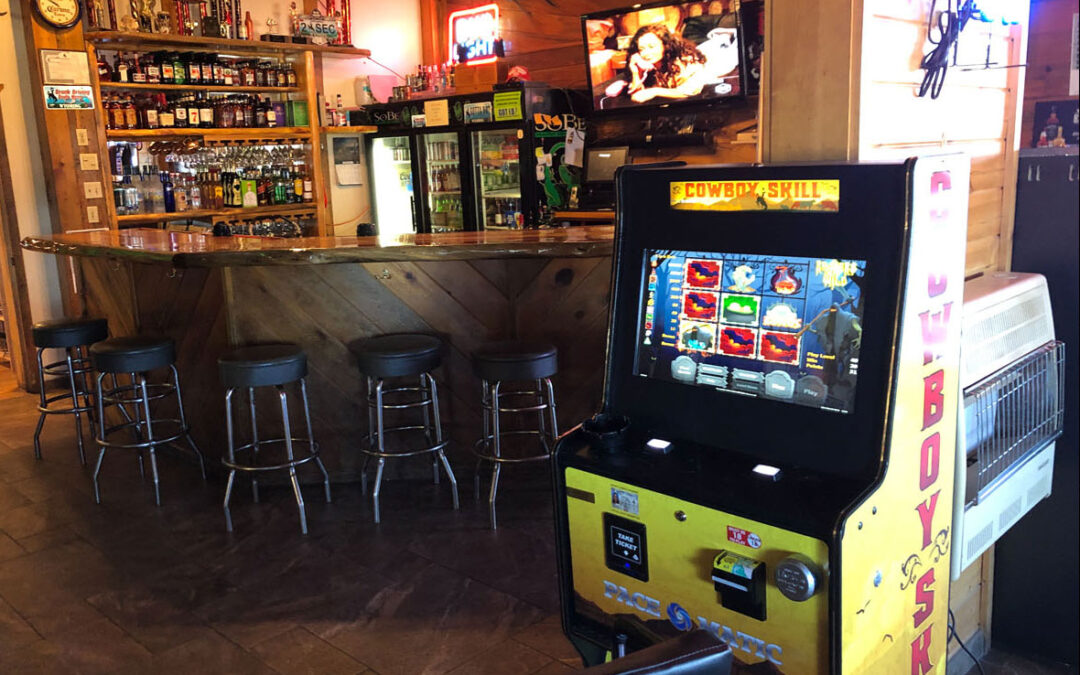 This appeared in the Northern Wyoming Daily News on October 28, 2021

WORLAND – To help make themselves known around the area, Cowboy Skill Games officials took time during Tuesday, Oct. 19 Washakie County Commissioners meeting to speak with the board about who they are and what they do.

Cowboy Skill Games defines itself on its website as “an organization that has recently become known for breathing new life into local bars, clubs, Veterans of Foreign Legions, American Legions and other fraternal organizations with compliant skill games distributes by Wyoming vending companies and powered by Pace-O-Matic.”

According to Director Jimmy Orr, the idea for the company came from the realization that the restaurant business is always changing due to technology.

“People are always on their phones now. As a result, tabletop games and other games aren’t as popular anymore,” Orr said in an interview this week. “Revenues in bars and restaurants were declining. The group of coin-op and amusement companies across Wyoming got together to figure out what they could do to help these small businesses grow. Skill games were one of the options. The more the operators learned about these games of skill, the more they looked into them.”

After investigating many companies, the group ultimately liked Pace-O-Matic’s approach – which is full transparency. According to Orr, the group looked into seeing what games would be legal under Wyoming state law. They then had meetings with legislators, mayors, county commissioners, city council members and the law enforcement community all across the state.

With help from their games, Cowboy Skill Games works to give back to the community.

Whether it be holding raffles for people in need, raising money for different causes, sponsoring local events or helping out service organizations, each of the members of Cowboy Skill Games are very involved with their communities, according to Orr.

“As a group, we’ve sponsored many events or participated in community events or donated money to individuals or organizations that really need help,” Orr said.

“In Worland, for example, we were the top sponsor of the ninth annual [Wyoming Giant Pumpkin Weigh-Off] and Pumpkin Drop earlier this month,” he explained. “The reason we did that is that it was a great community-building event. There is a private citizen that puts this event on at no benefit to him. He just did it for the community. And hundreds of people showed up to this great family-oriented community event,” Orr said.

“It was wonderful to be a part of and it reflects who we are. We’re a bunch of families that are part of Wyoming. We live in Wyoming. We raise our families in Wyoming. So we always want to help Wyoming.”

He added, “We were big sponsors of Cheyenne Frontier Days earlier this year. “We donated funds to the volunteer fire departments who battled the Mullen Fire last year. We’re sponsors of the First Lady’s Hunger Initiative. We honored law enforcement and first responders this year and last year. As a group, we get together and we decide how to pool our funds to help.”

Cowboy Skill Games currently has 15 games in Washakie County. According to Orr, responsible expansion of skill games is a policy decision for the state’s elected officials.

“We’re 100 percent skill,” Orr said. “A patient, skillful player can win 100 percent of the time. We put our name and contact information on every game. We follow the law. We’re active in our communities. We have a statewide compliance officer – a former state senator – who works closely with the county commissioners, city councils, legislators and the Wyoming Gaming Commission.”