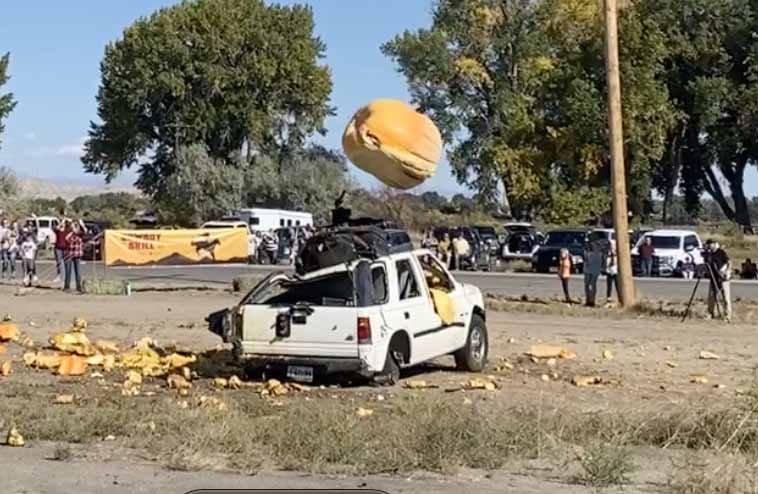 Although the atmosphere was festive throughout, it wasn’t until the promise of exploding thousand-pound pumpkins that the spirits turned raucous.

And with that, the crowd size grew going from a couple hundred at the beginning of the day to more than a thousand by the time the pumpkins met their spectacular demise.

It was kind of a cross between a massive tailgating party and a parade for what Jay Richard, the organizer of the Wyoming State Championship Pumpkin Weigh-Off and Pumpkin Drop, called the “stupidest event of all time which makes it awesome.”

Judging by the reaction of the kids alone, it was awesome.

The opening event was fun enough.

Giant fruits and vegetables — many of which could only be lifted by industrial-strength forklifts — being weighed on industrial strength scales to determine if any were heavy enough to break state records.

There were two record breakers, in fact.

The watermelon, grown by Worland’s Dawson Utterback came in at 40 pounds and Jason McGimpsey grew a 1,200 pound pumpkin which bested Montana’s old record by 32 pounds.

Because Mr. McGimpsey is from Billings and Montana does not have an official pumpkin-weigh-off event, he entered in the Wyoming event which is a member of the the Great Pumpkin Commonwealth — the sanctioning body which oversees these events.

Wyoming’s state record — set in 2019 by Cheyenne’s Andy Corbin with a pumpkin of 1,491 pounds — stayed intact.

It wasn’t expected to. Richard was growing a monster.

The colossal gourd was a lock. All he had to do was keep Macy together.

Any injury to the pumpkin’s core, Richard explained, would disqualify the pumpkin.

But on Thursday afternoon, only two days before the official event, disaster struck. Richard discovered a mouse had burrowed into the pumpkin’s core.

“It’s a lot like a race car driver on a 500-mile race coming around turn four, blowing a tire and hitting the wall,” Richard told Cowboy State Daily.

So what was Richard to do?

Send her off with a bang. Literally.

Macy was the first of four thousand-pound-plus pumpkins to be lifted by a 200-foot crane and dropped in the field adjacent to the truck repair shop.

Putting Macy in the sling got messy. The 82 degree heat was weakening Macy’s already weakened exterior.

She started collapsing on herself.

Then a much larger hole opened up and she started belching out gallons of yellow liquid.

“The is hilarious,” one of Richard’s colleagues laughed.

Richard had no time recognize the humor.

With all the urgency of a Scottie to Captain Kirk conversation, Richard yelled, “We gotta get her up in the crane now. I can’t hold her any longer. She’s falling apart.”

They slapped the sling to the crane and she she began elevating.

She didn’t make the full trip. About halfway up, chunks started falling and Richard pulled the plug. Macy was airborne.

With a thud, his would-be champion was no more. She exploded on the target: a snowmobile mounted on an Isuzu Trooper.

Richard explained that he hates winter so a snowmobile was a perfect target, he said.

The three other pumpkin drops were much like the first — outside of the belching liquid.

The kids cheered. The adults laughed. And the snowmobile and Isuzu got demolished.

After the last pumpkin dropped causing the front tires of the Isuzu to blow-out, the safety tape was let down and the kids ran out to grab pieces of pumpkin like an Easter egg hunt.

One child was disappointed when he was told he could not take the football-sized chunk of orange goo home with him.

“What would you do with it,” the child’s mother asked him.

He’s already planning for next year and might have a greenhouse (mouse-proof) big enough to grow a champion for the 2022 season.

Long term, he wants to join the one-ton club. That’s an exclusive group of growers who have successfully birthed a 2,000 pound pumpkin.

“Might take me awhile but who knows? That’s my goal eventually,” Richard said.