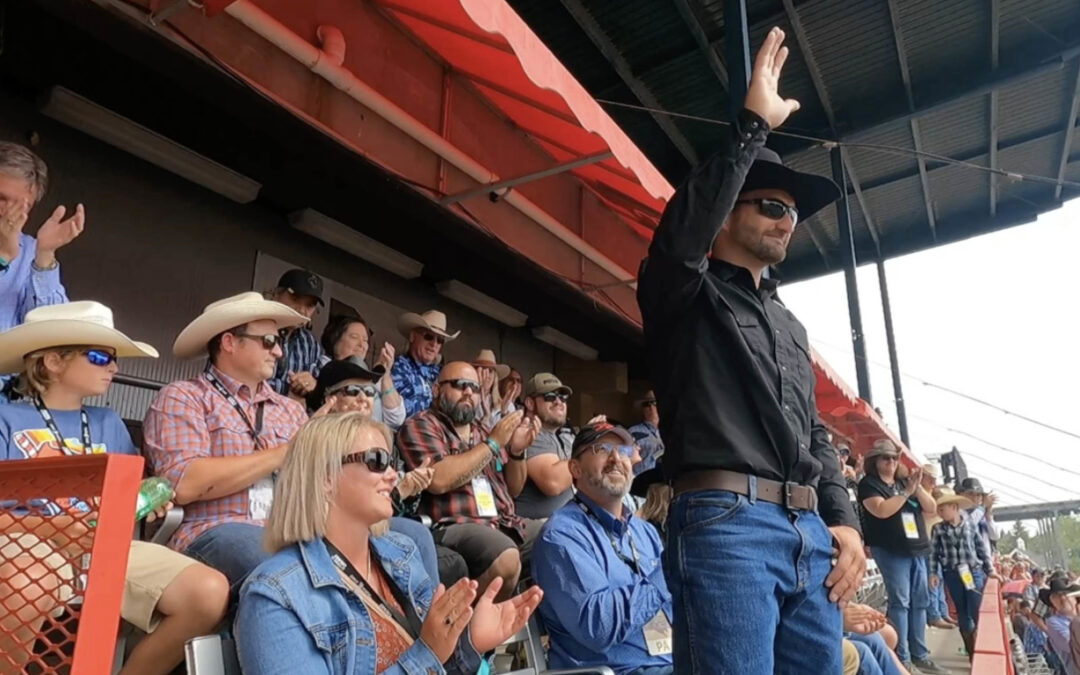 Bryant, a guest of Cowboy Skill Games of Wyoming, was asked to stand in front of the sell-out crowd as the rodeo announcer thanked him for saving the lives of two drowning women earlier in the month on the North Platte River.

“Ladies and gentlemen today we present to you, Natrona County Deputy Sheriff’s Officer Dexter Bryant.  Tell him that he’s a hero!” Yeriga said.

“Deputy Bryant, God bless you and thank you for your selfless and heroic act of service,” he said.

Bryant, who stood for more than a minute as the capacity crowd thanked him, was invited to the rodeo as a guest of Cowboy Skill Games, a top-level sponsor of Cheyenne Frontier Days.

Bryant, and his wife Amy, enjoyed the rodeo and the Blake Shelton concert later that evening.

Earlier in the week, Cowboy Skill Games hosted two F.E. Warren Air Force Base airmen who saved a kidnapped child from an armed fugitive. Like Dexter, they received public commendation during the Cheyenne Frontier Days rodeo.

According to reports, on Saturday afternoon, the Natrona County Sheriff’s Office dispatch received a report about an inflatable raft carrying five people down the North Platte River that had been punctured and sank.

Of the five people onboard the raft, none were using safety flotation devised. One person swam safely to shore and two managed to climb onto an island in the river.

The remaining two women grabbed onto branches overhanging the river from a tree on the island. However, they were unable to get onto the island due to its steep bank, a swift current and their lack of energy.

Bryant was the first to arrive on scene and began communicating with the two women in the water. One was running out of energy and couldn’t hang onto the branch much longer and her friend was afraid the woman would drown if she let go.

Bryant knew immediate action was critical to the situation and couldn’t wait for responding watercraft. He removed his vest, gun belt and boots before putting on a life-jacket and swimming to the island.

He then pulled both women out of the water and onto the island. Eventually, everyone was reunited on the shore with the help of fire personnel and their watercraft.

“I am exceedingly proud of  Deputy Bryant,” Natrona County Sheriff’s Sgt. Mark Bahr said. “I believe he no doubt saved at least one, if not two lives today. This was a great representation of the selflessness of one of our deputies,  and it was a superb exemplification of the professionalism and superior competency of this office.”

Undersheriff John Harlin described Bryant’s actions as “incredible heroism that should be recognized.” Bryant has been with the department for more than three years.