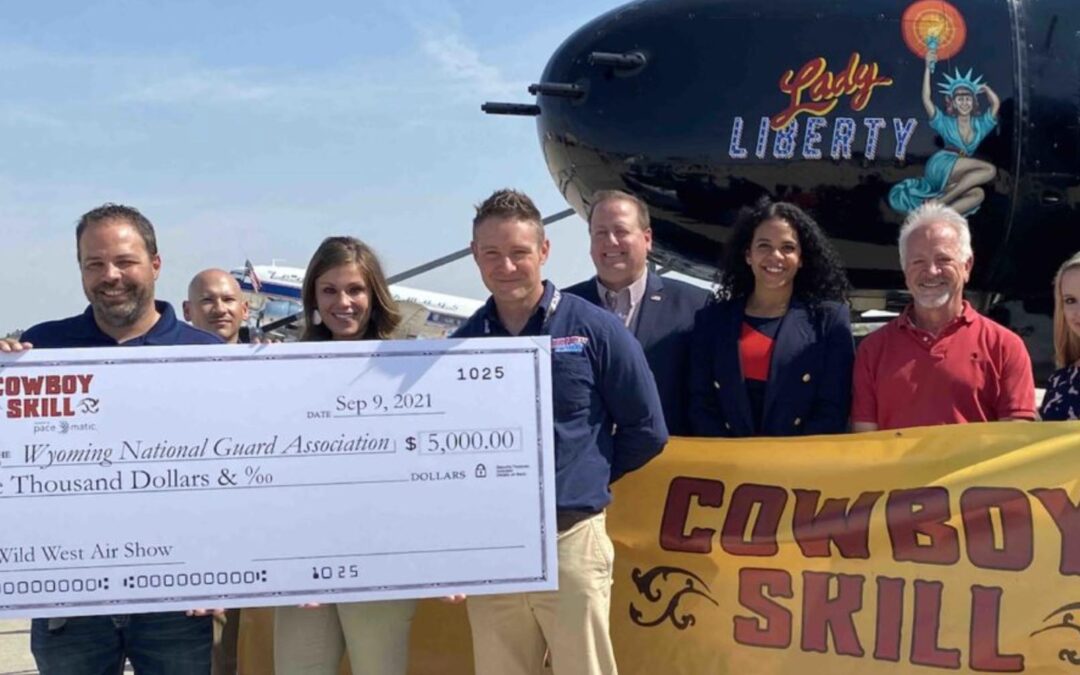 One of Wyoming’s most ardent supporters of the military was on-hand at the Wyoming National Guard in Cheyenne on Saturday to present a $5,000 donation to support the annual Wild West Air Show.

Members of the Cowboy Skill Games of Wyoming coalition, Air Show Director Maxwell McMilan, and Tiffany Hayes of the Wyoming National Guard Association, stood in front of “Lady Liberty” — a B26 Marauder which saw action in World War II — for the formal check presentation.

Coalition member and owner of Cheyenne’s Paradise Pinball Bob Burnham said the group was honored to sponsor the air show — especially this year.

“We are humbled on the 20th anniversary of September 11 to be a part of this great event,” Burnham said. “The patriotism on display this weekend is unparalleled.”

“Our Wyoming families have the utmost respect for our military, our law enforcement, fire departments and all of our first responders,” Burnham said.

“This is just another opportunity where Cowboy Skill can say thank you to the women and men who serve our great country,” he said.

Just weeks ago, Cowboy Skill was the top-level sponsor at Cheyenne Frontier Days where the organization hosted dozens of airmen, sailors, and soldiers.

On “Military Monday,’ Cowboy Skill arranged for two airmen to be honored for their heroism in front of 15,000 people attending the rodeo.

The two F.E. Warren Air Force Base airmen were responsible for catching a fugitive and rescuing a 10-year-old who had been kidnapped since December, 2020.

Cowboy Skill of Wyoming is an organization comprised of Wyoming-owned vending companies which distribute Cowboy Skill games across the state.